While 2020 was the year where the most visible change was that we modernized the appearance of the K-9 Mail project on the web (website redesign, new user forum, presence on Mastodon and Twitter), 2021 was the year a new stable version of K-9 Mail was finally released 🎉

Let’s have a brief look at what happened last year.

Even though a lot of work towards a new stable release was done the previous year, 2021 started off with 16 more beta versions.

The most important blocker was the missing Push support for IMAP accounts. The feature had to be completely rewritten because of changes to the Android platform.
At the end of June the feature was finally re-introduced in K-9 Mail 5.735 (beta). But it took another month to fix the bugs that our beta testers found. 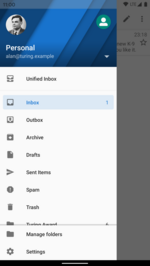 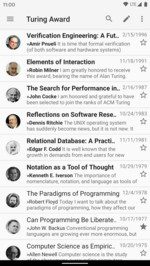 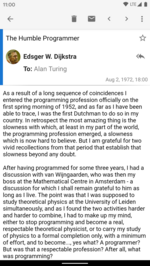 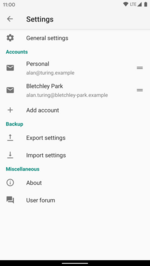 The most visible change was the user interface redesign. Besides a visual update, the app navigation was changed to closer match that of other mobile email apps. Not everybody appreciated this. But from answering the same support questions for years, we knew that some aspects of the app were very confusing to a lot of users.

Of course there were also bugs that made it into this new version. A notable one was that K-9 Mail ended up sending commands to the server in an endless loop when Push was enabled but the server didn’t support it. A company maintaining the server software used by at least two large German internet providers contacted us because K-9 Mail users were causing unusually high load on their servers 😬 Fortunately, a user had already helped us to track down the bug causing this.

So the month after the release was spent fixing bugs and making small tweaks to the user interface. In total there were 6 patch releases.

The focus for the next major release is fixing notifications. In 2021 we published 8 beta releases fixing various notification-related bugs and re-introducing features that were lost due to changes in the Android platform. This work is still ongoing, but nearing the end 🤞

Development activity in 2021 was about the same level as the year prior. Due to the 5.800 release, there were quite a bit more issues created in our bug tracker.

All of the translations for K-9 Mail are provided by the community. I wasn’t able to find out how many people contributed in 2021. In total 434 persons contributed 56 languages (some of them are very incomplete; “only” 48 languages besides English are actually included in the app). 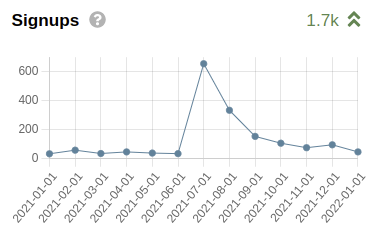 The weeks after the release the forum was quite busy. A lot of people voiced their dissatisfaction about the new version. Some users asked for help navigating the new user interface. And apparently the release attracted quite a few new users. Because K-9 Mail’s account setup process isn’t particularly great, new users usually ask for help adding their email account to the app.

Most of the time the forum is used for support questions. And there’s a small group of people spending a lot of time answering those questions. They are the heroes of this community and consequently were awarded the Community Heroes badge.

In February we published a call for funding to allow cketti to dedicate more time working on K-9 Mail. A lot of people thought this was a worthwhile goal and we received €51,002.55 in donations.

Read the blog post Donations in 2021 for more details.

The focus this year will be on the basics.

We’re also talking to the Thunderbird team to figure out how the two apps can better work together. There are no concrete plans yet. But we have a lot of ideas. Some of them might even be good 😉

A big thank you to everyone who contributed to K-9 Mail. Whether you wrote code, worked on the documentation, answered questions on the forum, donated, or spread the word on social media.

If you have questions or comments, please let us know in this forum thread.